I fell in love with the idea of starting a business at an early age.

At 7 years old, I was finding, cleaning, and selling golf balls on the course we lived on.

Some of the players were quite fond of me.

Many of them took me up on my irresistable offer of “2 for a dollar.” A steal.

A lot of them yelled for me to get the hell off the course.

But I’ll never forget the guy that pulled up in his cart, rifled through my bin of balls, and then turned around bought the whole bin for $40.

What I DID know is that I didn’t want to work at Block Buster Video any longer.

I also knew that I didn’t want to go to school.

Coming from a Polish immigrant family where my parents had a couple Master’s degrees and a PhD, school was never really up for debate.

My dad knew, though, that if I said I wasn’t going, trying to convince me otherwise was pointless.

He told me that my only chance to make a decent living without a college education was to get into sales.

So that’s what I did.

I spent weeks clipping job ads out of the newspaper and making calls.

Finally, I narrowed it down to 2 opportunities:

Or this other job…

I had no clue what it entailed.

After a few rounds of interviews, I learned there were 3 primary things that would eventually become my world at z57:

Anything would be better than Block Buster frickin’ Video.

I did well in the interviews and they offered me the job (which at the time, I was the youngest person they’d ever hired, and the only non-college graduate).

I remember feeling pretty good about myself.

Little did I know z57 would forever change the trajectory of life.

My new grind consisted of cold-calling real estate agents (150+ dials per day), setting appointments, and doing over-the-phone demos in front of the computer to sell a templated website solution.

I had a lot to learn, so I worked really hard at it.

I wanted to prove to myself, and my family, that I could be successful without school.

After a few months of getting my teeth kicked in on calls, the effort started paying off.

Many of them were seasoned pros, but I was hungry, tenacious, and creative.

I was also lucky to have a few amazing mentors.

I will forever be thankful to greats, like Brian Tracy, whose audio I listened to for many, many hours (“The Psychology of Selling” literally changed my life)…

And sales managers, like Ed O’Neill and Stephen Capezza, who gave me a lot of guidance, and were incredibly patient with my then 19-year-old punk ass. Especially Ed!

Problem was: I didn’t believe in what I was selling.

So I would go home at night and work on optimizing clients’ websites to perform better.

I focused on SEO and CRO.

SEO, I’d learned a lot of from Ed, and I put in countless hours on my own after work.

(2004 SEO tactics were wild. There was some ridiculous stuff you could get away with back then, and it worked!)

This came naturally to me.

But I was doing it.

To me, it was just logical.

I understood that lead generation was critical for my clients, and that there were changes I could make to their websites that would get them to convert leads at a higher rate.

All these elements have an impact on whether or not a consumer will submit their information through a website or landing page.

CRO became a passion (and still is today).

The stuff I was doing was working.

My clients’ websites were performing better, and some of my ideas became upsells and product improvements.

The company was too big and I didn’t have enough clout.

I was just a young sales guy with a rebellious streak and a lot of ideas and opinions.

So I put in my resignation.

My parents couldn’t believe it.

I can still remember their disappointment, but I didn’t care.

Within a few weeks, I was hired as the sales manager at an internet startup.

They had zero clients and an unfinished product when I accepted the offer.

There wasn’t much to manage, frankly, but an unruly bunch of the owner’s friends (none of whom had done any sales, and weren’t at all motivated to pick up the phone).

We were also doing websites (this time for mortgage originators), but nobody was buying.

So I started dialing.

A switch had flipped in my head.

I went from a good albeit green salesman at z57…

And turned into a phone sales beast.

Prospects were showing up to their appointments, and they were buying.

My approach was very consultative and educational, but at the same time, I wouldn’t take “no” for an answer.

Between me and another sales guy I’d helped recruit, we got the company to profitability in just a few months.

This was really exciting and I was in at the ground level.

The owners, however, weren’t being serious about growing the business.

Before you knew it, they were cashing in fat checks, buying new Mercedes Benzes, and not investing back into the company.

At that point, I was 20 years old, and I’d gotten a taste of what growing a “startup” felt like.

It was a real adrenaline rush.

And I saw what was possible—going from zero, to $40K+/month in MRR, having played a pivotal role in that growth.

I decided I was going to start a REAL company—building optimized websites, marketing, and lead generation for businesses.

My bread and butter was (and still is) mortgage, real estate, and insurance.

In 2006, I co-founded my first company with a partner who received money to start the business from his wealthy uncle.

We started out doing mortgage website templates and email newsletters.

My experiences at that company could fill a 300+ page book, so I’ll save that story for another day.

Let’s just say it was a mildly successful venture, and the company still exists today.

Most importantly, over those 5 years, I learned a LOT about business (and life)—

How to be a leader, how to inspire people…

And the most important lesson I learned (this was a tough one where I didn’t understand the lesson at the time, but now I’m so thankful for):

How NOT to run a business.

In 2011, I resigned from my position and walked away from ownership with the vision of starting leadPops—a lead generation software company whose specialty would be CRO.

We landed a whale early on, partnering with Zillow in 2012 and 2013 to help them rebuild their entire Mortgage Marketplace tech and strategy.

In 2014, we partnered with Bankrate and eventually took over the landing pages and lead conversion strategy for 80%+ of their mortgage rate table advertisers.

The partnership with Bankrate was a game changer for us.

They invested over $250K over a 3 year period as a client of leadPops (not an equity investor) before changing their business model when they were purchased by Red Ventures for $1.24 billion in 2017.

Between 2012 and today (it’s the last hours of 2019 as I type this), leadPops has invested every penny back into the business.

We took everything we learned from working with 2, billion-dollar companies (Zillow and Bankrate)…

2016 was also the year I published my first book, “The Mortgage Marketing Manifesto.”

Writing TMMM was one of the best business decisions I’ve made (I plan to publish another book in the next couple of years).

Over the last decade and a half, I’ve taken a LOT of swings.

Sure, I’ve had some success in business, but it’s nowhere near what I have planned for the next couple of decades.

In fact, my biggest wins so far are not even business related.

In 2013, I married the girl I fell in love with in high school—my soulmate, Ashley.

My wife and I bought a home in a beautiful, family-oriented community in San Diego, CA.

leadPops is approaching 2,000 clients across the country.

We’ve grown our team from just a handful—to 32 amazing people. I love the culture and company we’re creating.

We just moved into a new office space that’s perfect for us, with plenty of room for growth—we’re hiring, btw!

leadPops is going into 2020 as a profitable, $2M+/year SaaS + managed marketing services and consulting business.

And we plan on 10Xing that over the next 3 years.

I’m having the time of my life, and I’m incredibly thankful for all of it. 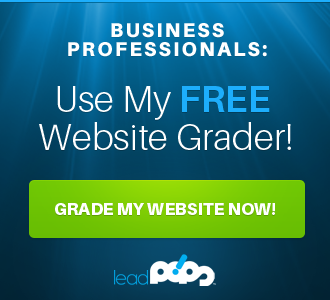